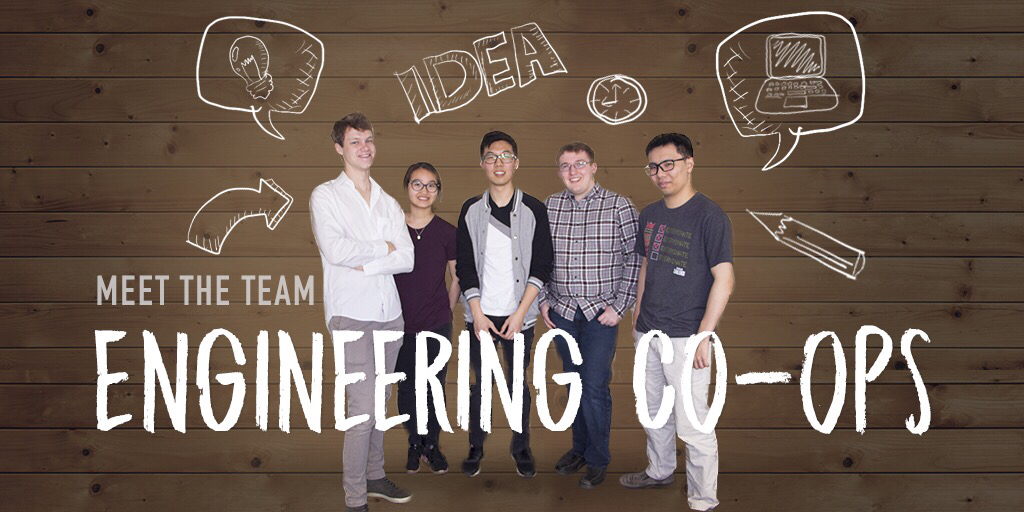 Meet Ellen Liu, Sam Parhimchik, Daniel Le, Ryan Lee, and Sam Phillips- five young, ambitious co-op students on the path to becoming engineers, nearing the end of a four-month work term at Terramera. Terramera’s VP of Engineering, Travis Good, says the students on his engineering team should expect to undertake rigorous engineering practices that would put them in the stead of a big company but with the dynamism and environment of a small company. We asked this round of students about their experience at Terramera, and they said it didn’t disappoint!

Q: How did your experience at Terramera meet your expectations?

Daniel: I was pleasantly surprised. Terramera is very open and things get done fast. The R&D team gets back to us quickly and we deal with things succinctly.

Sam Parhimchik: Yeah, Terramera exceeded my expectations. A lot of it has to do with Travis’ mentorship abilities.

Ellen: I expected to be doing smaller tasks, so I was really pleased that we were given a lot of responsibilities. I thought I would be testing and I’m not!

Q: What kind of work did you do?

Sam Phillips: That’s hard to answer because what we’re doing now, even Travis didn’t expect us to be doing back in January. But a list of things we’ve done includes web development, software and hardware engineering, networking, and product development.

Q: What was your biggest Aha! moment at Terramera?

Ryan: Probably in my second week when I really started to understand how the entire system works together and understanding the process.

Sam Parhimchik: Mine was when I realized I can learn anything. I used to have a mental barrier, thinking things were unattainable. But now my mindset has changed, and I’ve realized I can do anything if I set my mind to it.

Ellen: When I realized you don’t need to learn everything in school. You learn so much more on the job!

Q: What skills did you gain that you will take to your next job?

Sam Parhimchik: Communication- being able to talk to anyone. I feel more comfortable voicing something, even with people I don’t really know, and found it to be a tool to get to know them better.

Ryan: I learned how to get requirements for the scope of the project you’re trying to build. There are a lot of meetings that go into figuring out what the end user wants and understanding their needs.

Q: What advice would you give to future co-op students at Terramera?

Ryan: I would tell future students that the company culture is really chill. I was confused at the beginning, trying to figure out the expectations, but then I realized it’s just that chill!

Sam Phillips: At first, I didn’t realize how easy people here are to talk to. They’re super awesome and totally willing to help, both in and out of our crew.

Sam Parhimchik: I would tell the co-ops to not be afraid to voice their thoughts and learn what they want to learn. And just ask questions, that’s a big one.

Q: What was your favourite part of the experience?

Sam Phillips: Solving interesting problems, whether it’s machine learning or an interesting implementation. Working at something until you come to the solution.

Sam Parhimchik: I just love the culture here. The people are so chill. It’s something that matters a lot, the people are the company.

Terramera recognized as one of the country’s leading innovators who is moving the needle towards a net zero.