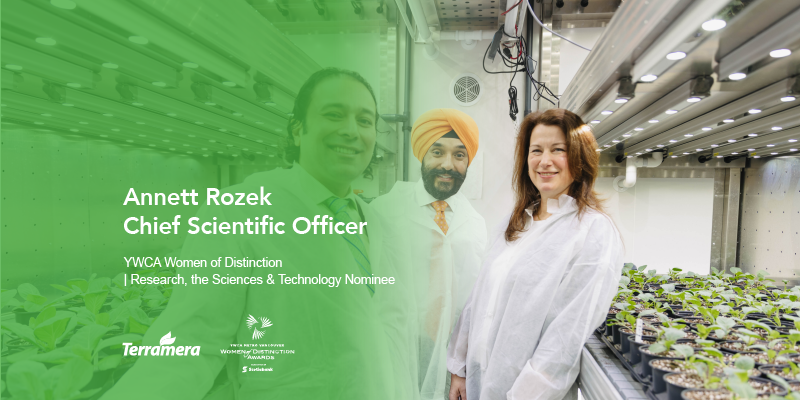 VANCOUVER, BC – March 8, 2021 – Terramera’s Chief Scientific Officer and visionary leader, Dr. Annett Rozek, was announced as a nominee for the prestigious YWCA Women of Distinction award today, on the 110th annual International Women’s Day. She is nominated for the Research, the Sciences, and Technology category for making a significant and sustained difference in Metro Vancouver through her dedicated pursuit of scientific, technological, and research-based discoveries.

“It is an honour to be nominated for this award and recognized as a valued member of the research, science, and technology field in Metro Vancouver by the YWCA,” said Dr. Rozek. “I deeply respect the work YWCA does to improve and empower our community and to recognize women who are making a difference. The Women of Distinction award is an important recognition that elevates women leaders and encourages others to believe they can do the same.”

A trailblazer in her field, Dr. Rozek developed Terramera’s revolutionary Actigate™ targeted performance technology alongside the Founder and CEO. Recognized as a World Changing Idea by Fast Company, Actigate can significantly reduce the global synthetic chemical load in agriculture. Dr. Rozek is also a dedicated member of the Mitacs Research Council, maintaining the research integrity of all Mitacs programs, and an active mentor both in her role at Terramera and with Locelle, a local mentorship and professional development program for women in tech.

As a Women of Distinction nominee, Dr. Rozek is also eligible for the Connecting the Community Award which raises awareness for YWCA Metro Vancouver’s programs. The recipient is selected by public vote, and wins the honour of donating $10,000, courtesy of Scotiabank, to the YWCA area of advocacy of her choice.

“Throughout my career it has been my experience that we only achieve what we believe we can. Our beliefs about ourselves shape the opportunities we take,” Dr. Rozek explained. “That’s why I have chosen the Advance Gender Equality area of advocacy, to fight stereotypes that limit women and girls’ beliefs in who they are – and who they could be.”

Terramera is a global agtech leader fusing science, nature and artificial intelligence to transform how food is grown and the economics of agriculture in the next decade. With its revolutionary Actigate™ technology platform, which was recognized by Fast Company as a 2020 World Changing Idea, Terramera is committed to reducing the global synthetic pesticide load 80% by 2030 to protect plant and human health and ensure an earth that thrives and provides for everyone. The privately held, venture-backed company was founded in 2010 and has grown to include a world-class bench of engineers, scientists, advisors and investors. Terramera is headquartered in Vancouver, British Columbia, with integrated operations in Canada, the US and India that include research labs, a greenhouse, and more than 250 patents in its global IP portfolio. For more information, please visit Terramera.com